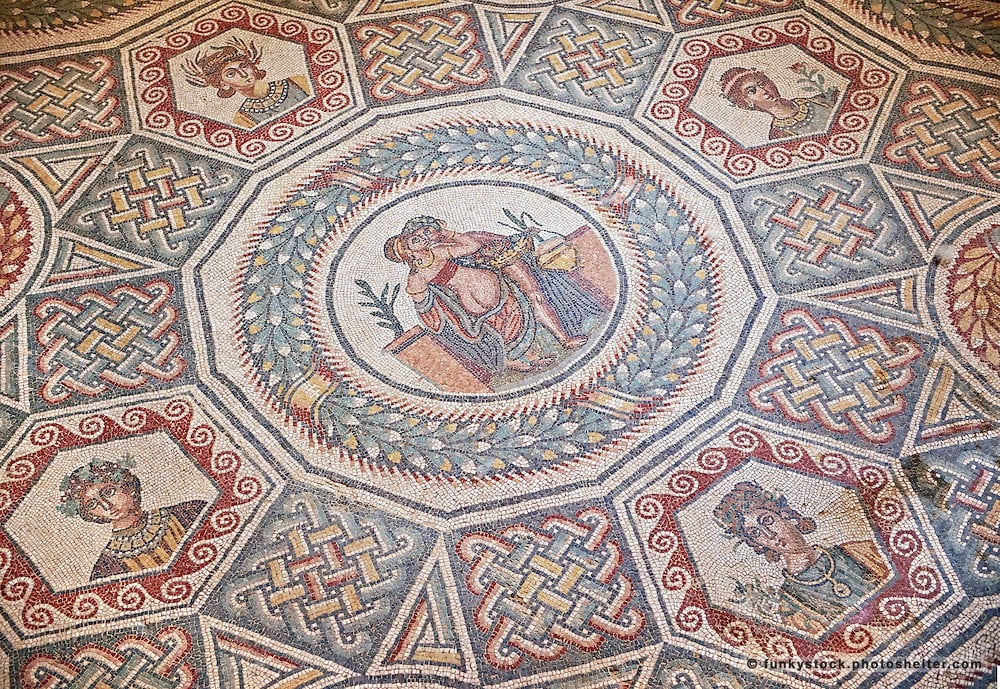 An Overview of Roman Mosaics

A Roman who wished to display his wealth and exhibit his wisdom and knowledge could choose to hire a craftsman to create colorful mosaics to decorate the floors or walls of his home. Mosaics were a popular and commonly admired style of decoration throughout the Roman world.

Mosaics are a type of artwork that is created when small cubes of stone, glass or other materials are assembled in such a way that they create a pattern or image.

Originally this concept was inspired by the Greeks, who embedded pebbles in mortar, especially favoring the colors of black and white. The Romans further developed this artform by cutting materials into uniform, usable cubes and incorporating brightly colored stones or glass into their creations. Marble and limestone were common types of stone used in these images.

This stone was somewhat easier to work with and was often available in a variety of colors and shades. Fresh mortar was spread on the flat surface, the cubes of stone were placed into this mortar in a particular pattern, and then more liquid mortar was used as a grout. Spread over the surface, the grout filled in any gaps between stones before being cleaned off and polished to create a durable surface. Each individual piece of a mosaic is called a tessera, or plural, tesserae.

What was depicted in mosaics?

Mosaics were frequently used to decorate floors, but there are examples of mosaic artwork on walls, columns, fountains, niches and pediments.

They were expensive and time consuming to create, but once completed, mosaics were durable and easy to clean. Mosaics were frequently used in baths as well as in other public buildings, temples, and many private homes. This style of artwork was so popular that there are thousands of examples across the area that was formerly influenced by Romans.

As mosaics were frequently built into the foundations of buildings, they are often well preserved for modern observers. The themes commonly seen in this style of art include divine characters or mythological scenes. Famous people were immortalized, often depicted as involved in a well-known action or battle. Various types of animals were popularly incorporated. Daily life was also commonly envisioned in floor mosaics, including hunting, fishing and wrestling. Additionally, there were numerous geometric patterns, especially in borders and edges. This simulated a sense of movement, allowing the mosaics to be appreciated from various perspectives throughout the room.

Why are mosaics useful to researchers?

For modern scholars, such mosaics provide a wealth of information about Roman culture, including dress, weapons, foods and lifestyle.

Mosaics also reflect their values and religion, along with education, and common familiarity with mythology. A Gorgon’s head, for example, was a commonly depicted theme in mosaics, as this image was thought to ward off evil influences or bad luck. In a common trend in Pompeii, many mosaics that are well-preserved by volcanic ash depict dogs, along with the Latin phrase for “beware the dog”.

Mosaics are found in a wide area of the Roman world

Current scholars study and appreciate mosaics as they are some of the most widely spread and best preserved types of Roman art available and are an invaluable record of Roman thought and life.

The craftsmen who created these large scenes were truly very talented. Their creations have stood the test of time, remaining colorful and hardly fading.

Why are mosaics often well preserved?

The Great Hunt Mosaic The Great Basilica, the private apartments, at the …