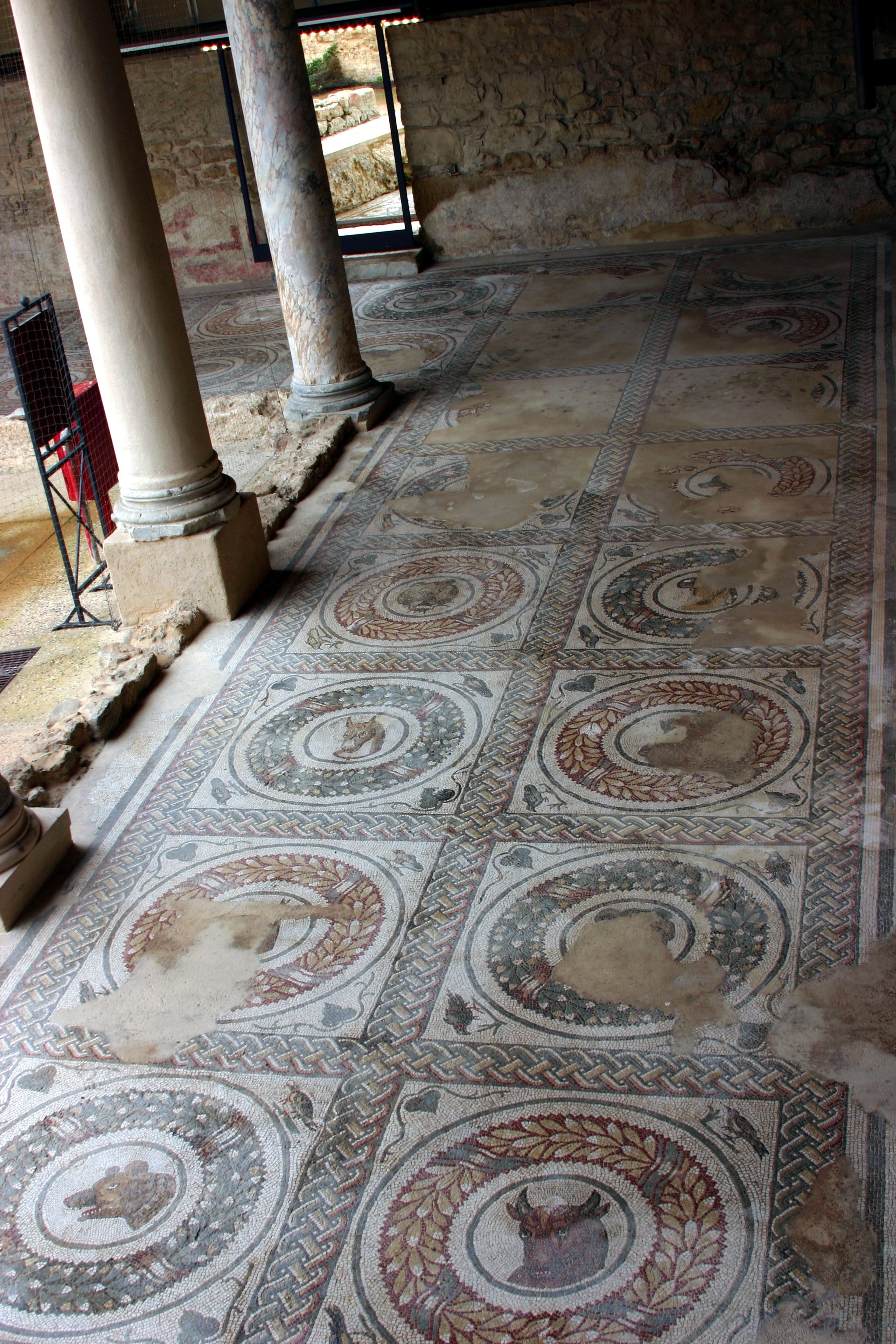 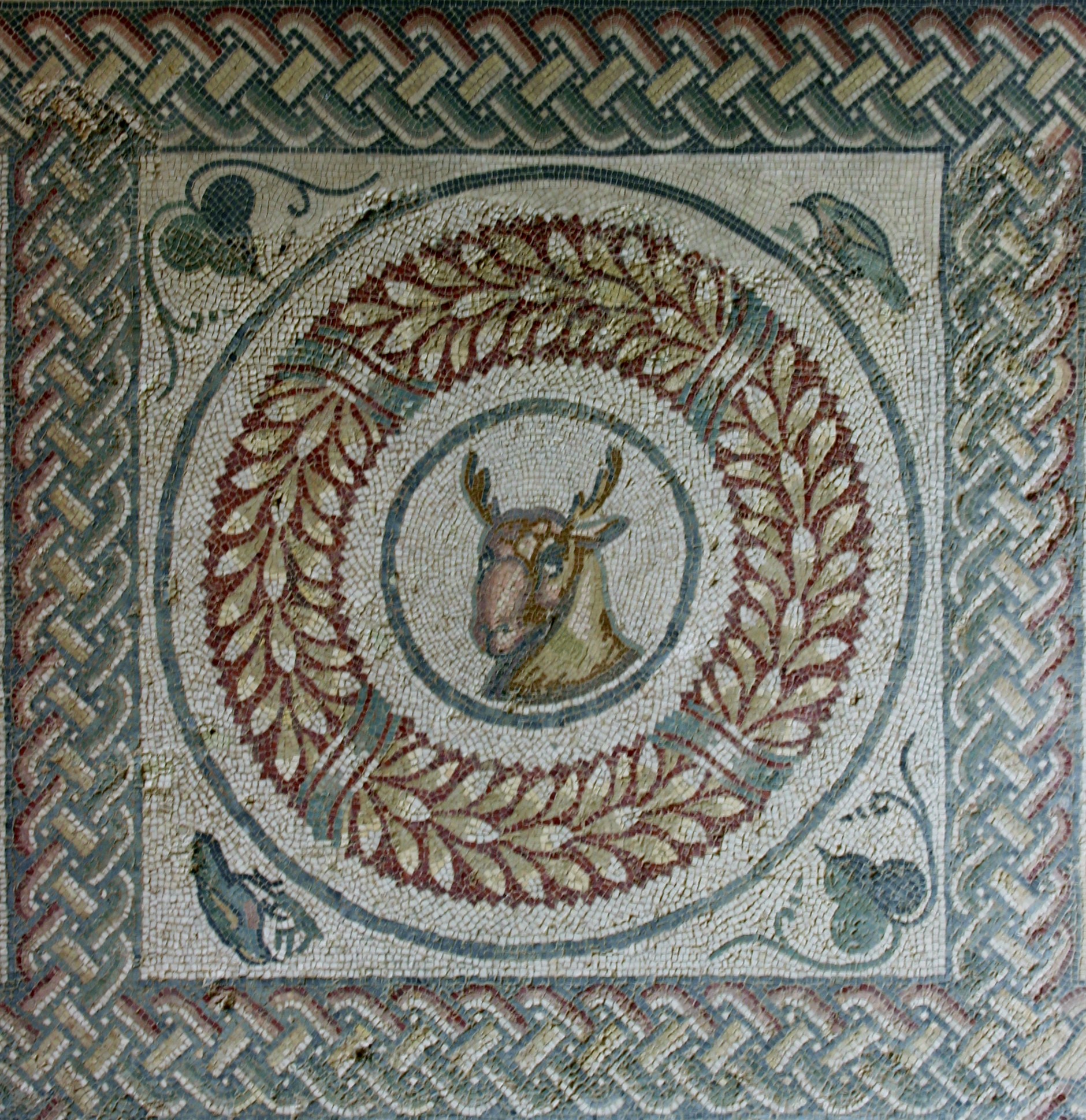 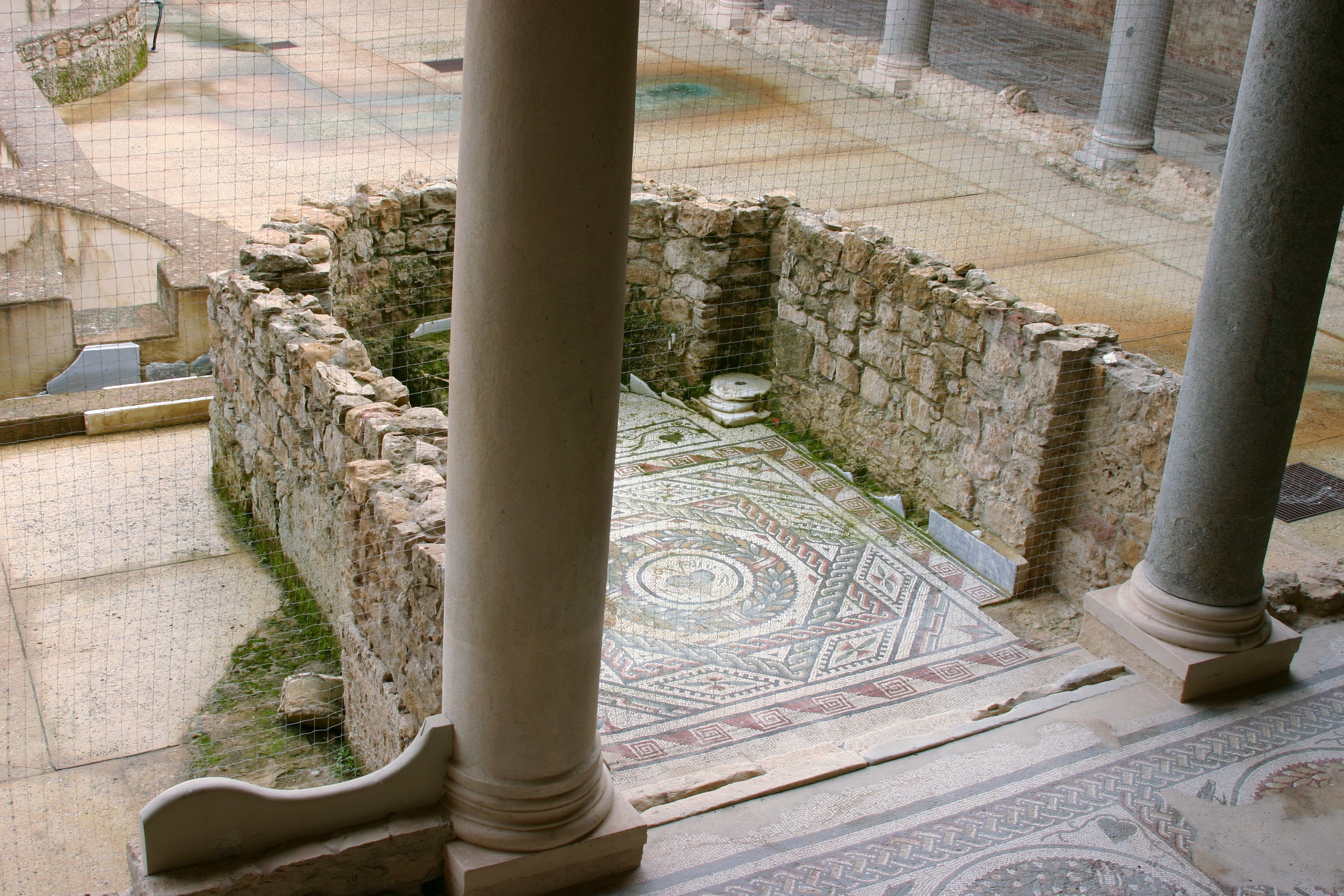 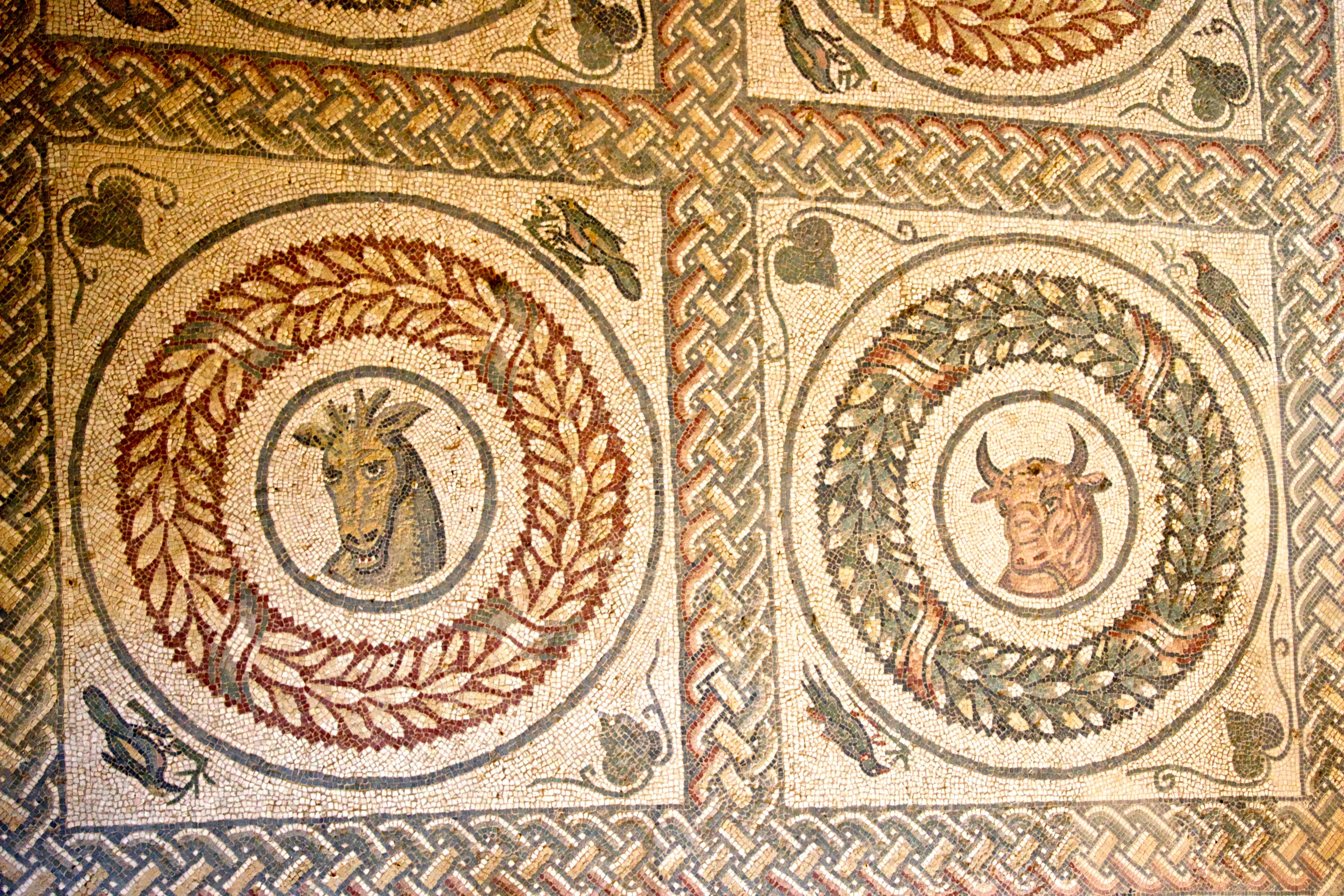 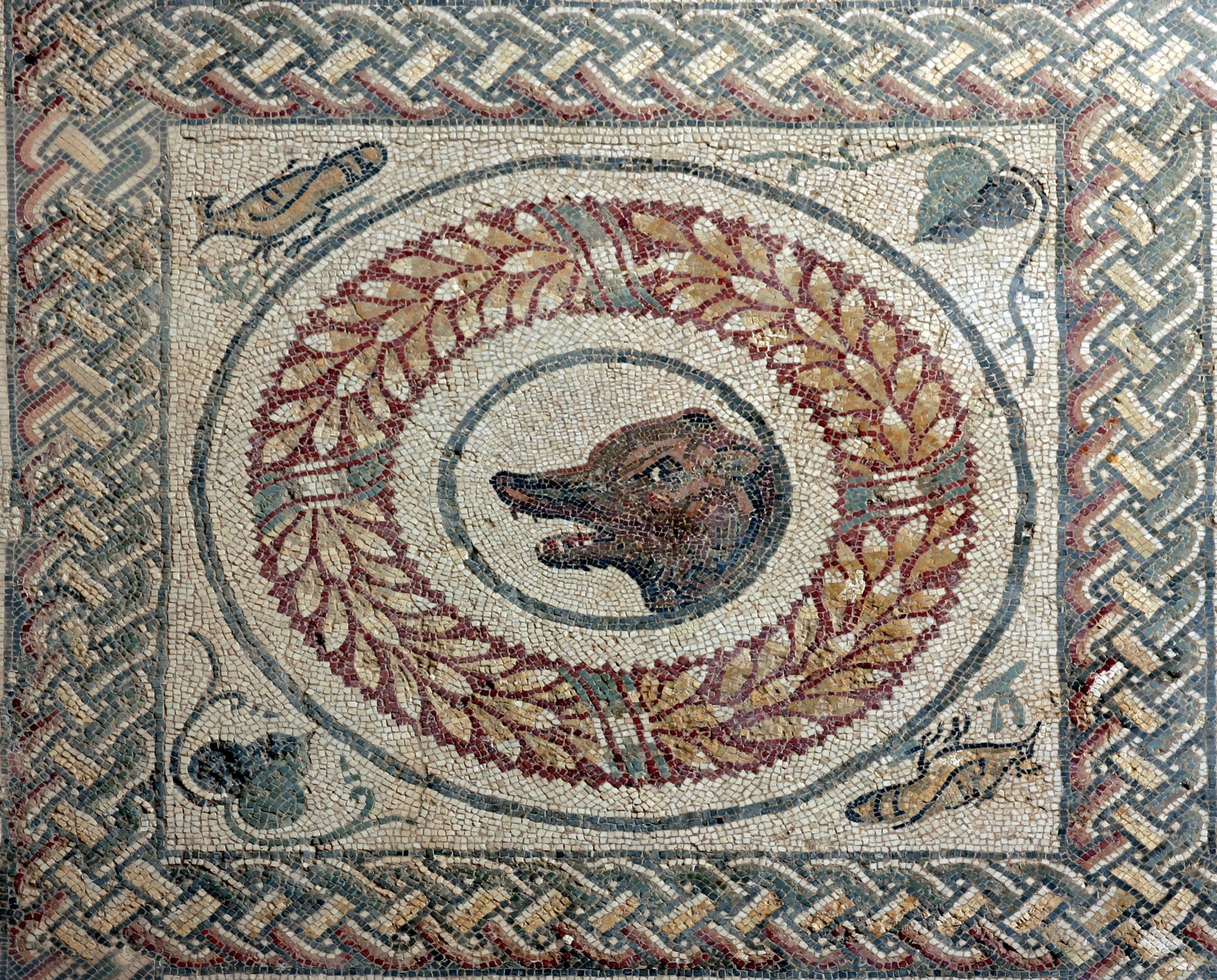 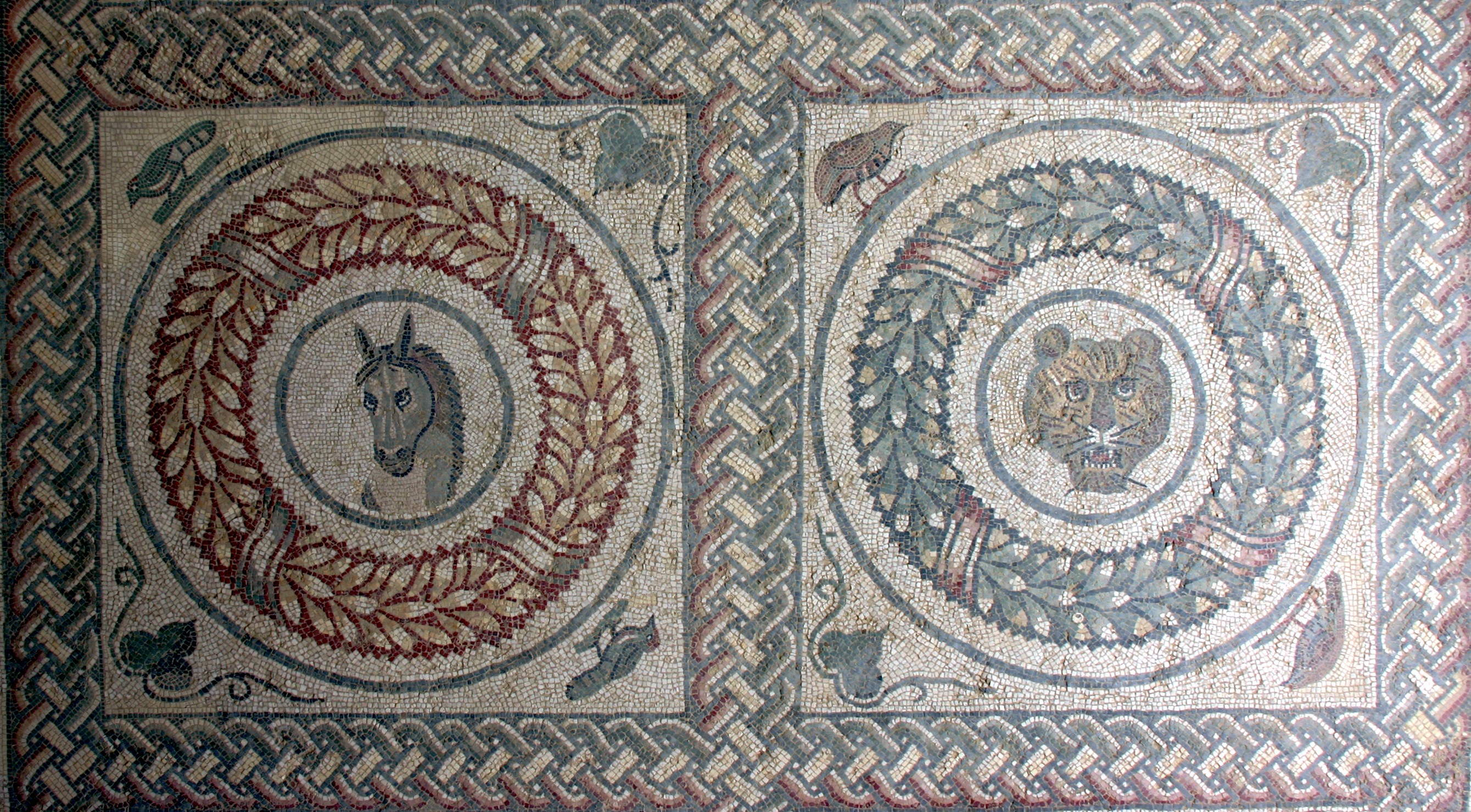 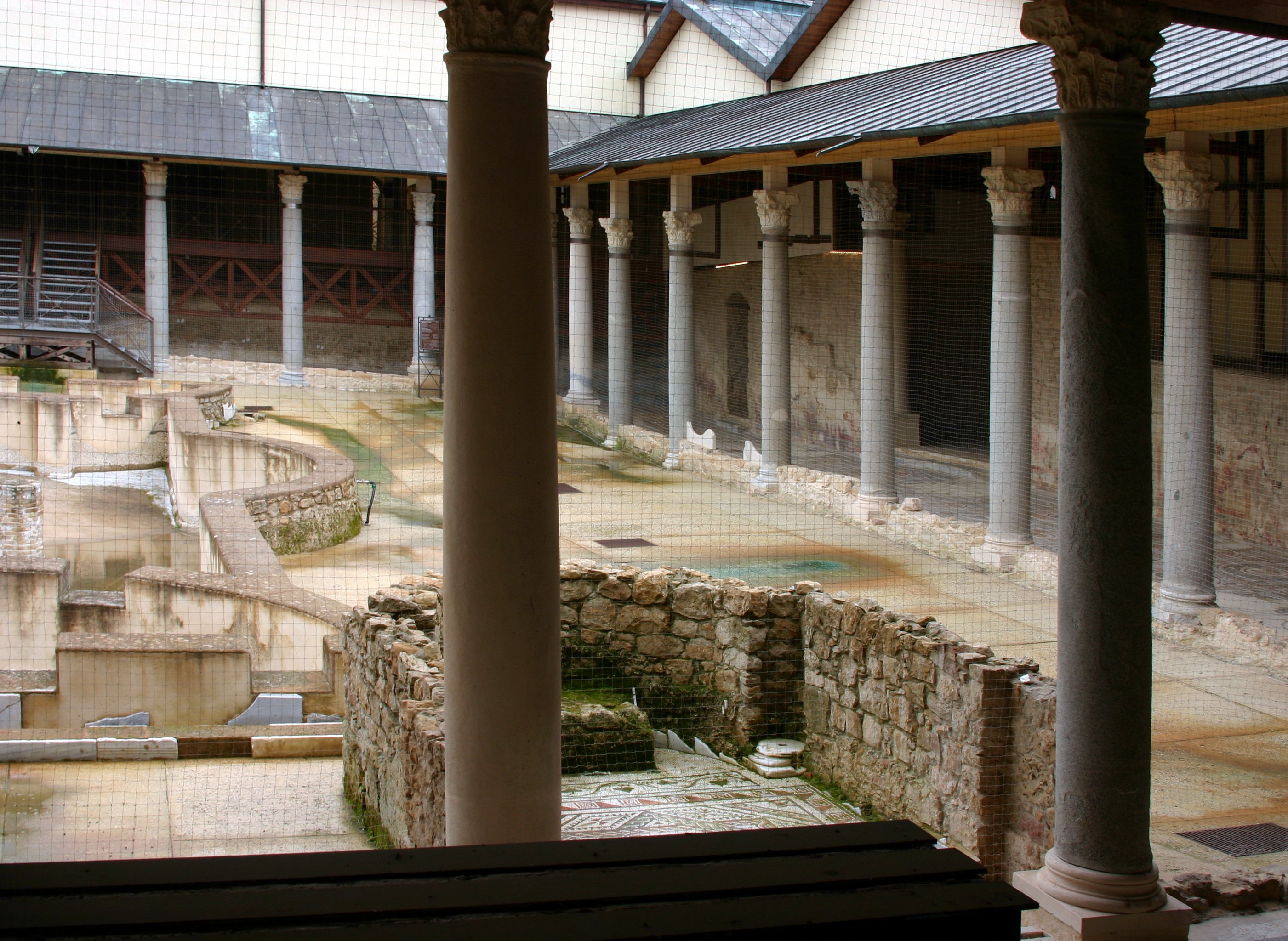 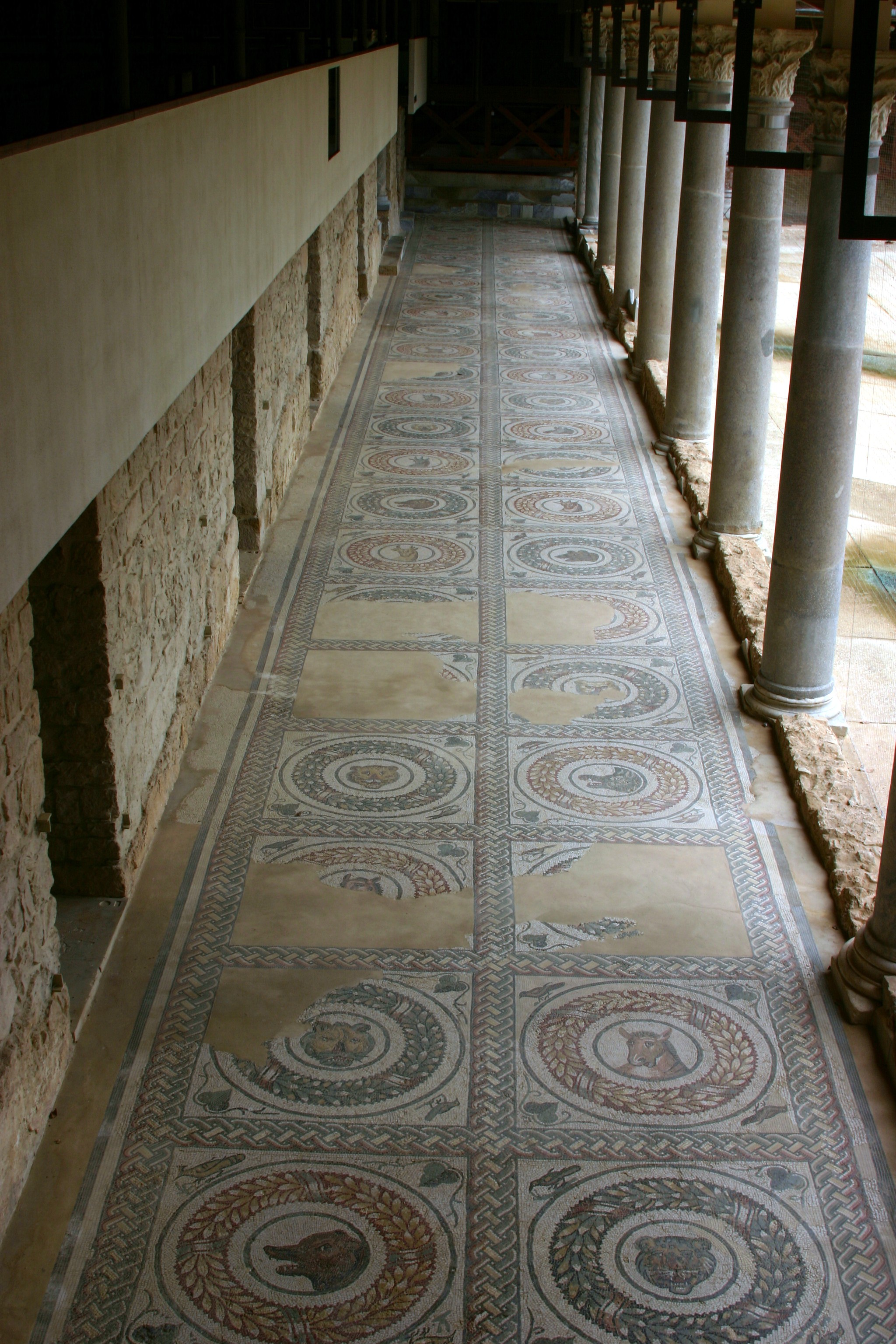 The peristyle is the central part of the Villa Romana del Casale. From the peristyle there is access to the thermal baths through the entrance to the baths, to the Service rooms with geometric mosaics, to the Room of the Seasons, to the Room of the Little Hunt on the north side, by means of three stairs to the Corridor of the Great Hunt on the east side, and to the antechamber of the Room with Girls in Bikini, the Room of Orpheus and a corridor leading the Elliptical Peristyle on the south side. The entrance to the peristyle is from the atrium via the tablinum. The peristyle is a trapezoidal, almost rectangular space, measuring circa 40x30m (N 40m, E 30m, S 38m, W 31m). It is surrounded on all four sides by a portico supported by a colonnade of slender granite columns with Corinthian capitals, ten on the longer sides, eight on the shorter sides. Not all the columns are of equal height (probably because they are reused from earlier buildings) so some are placed on elevated sockets in brickwork. Between the columns a low marble covered brick wall separated the portico from the central garden. In the centre of the peristyle is a fountain. The basin in oriented mostly east-west. It is rectangular in shape, with a circular widening in the middle and semi-circular basins inserted at the ends, with the circular part towards the centre. In the middle of the fountain is a small statue. The fountain received its water from the eastern of the two aqueducts. The inside of the basin was covered with geometric mosaics along the border and at the bottom. Just in front of tablinum is the lararium, a small shrine for the house gods that is always placed near the entrance of a roman house. It is a small square room that fits in between two columns of the portico. The lararium has a small apse flanked by two columns. The remains of the altar is in the bottom of the apse. The square mosaic has a geometric pattern of squares that form an eight pointed star in which there is a garland of laurel with a coloured band. In the centre of the garland is a large ivy leaf. The ivy motif is repeated under the apse where there is a branch of ivy with several leaves. The mosaic is normally covered with sand to protect it from the weather. The whole area under the portico is covered with mosaics. Guilloches of three interwoven bands, intricately connected in the corners, divide the floor into square elements. In each square is inserted a circular garland of laurel, alternately with green leaves on a black background with a red/pink band and with golden leaves on a red background with a green band. Within the garlands are heads of different animals, both wild and domestic, some shown full-face, some half-face and others in profile. Small birds and leaves of ivy are inserted into the corners between the garlands and the guilloches. In front of the central flight of stairs leading to the Corridor of the Great Hunt the original mosaic had been changed. The date of this change is not certain, but it is probably sometimes between 500 CE and 800 CE. In front of the stairs is a geometric zig-zag pattern, and along the sides of this are branches of poorly done ivy. Along the S. side there are some remains of wall paintings. The feet of three figures in separate rectangular fields remain, two persons appear to hold shields and one seems to be dress in a feet long embroidered tunic or toga. From http://sights.seindal.dk/sight/465_Peristyle.html