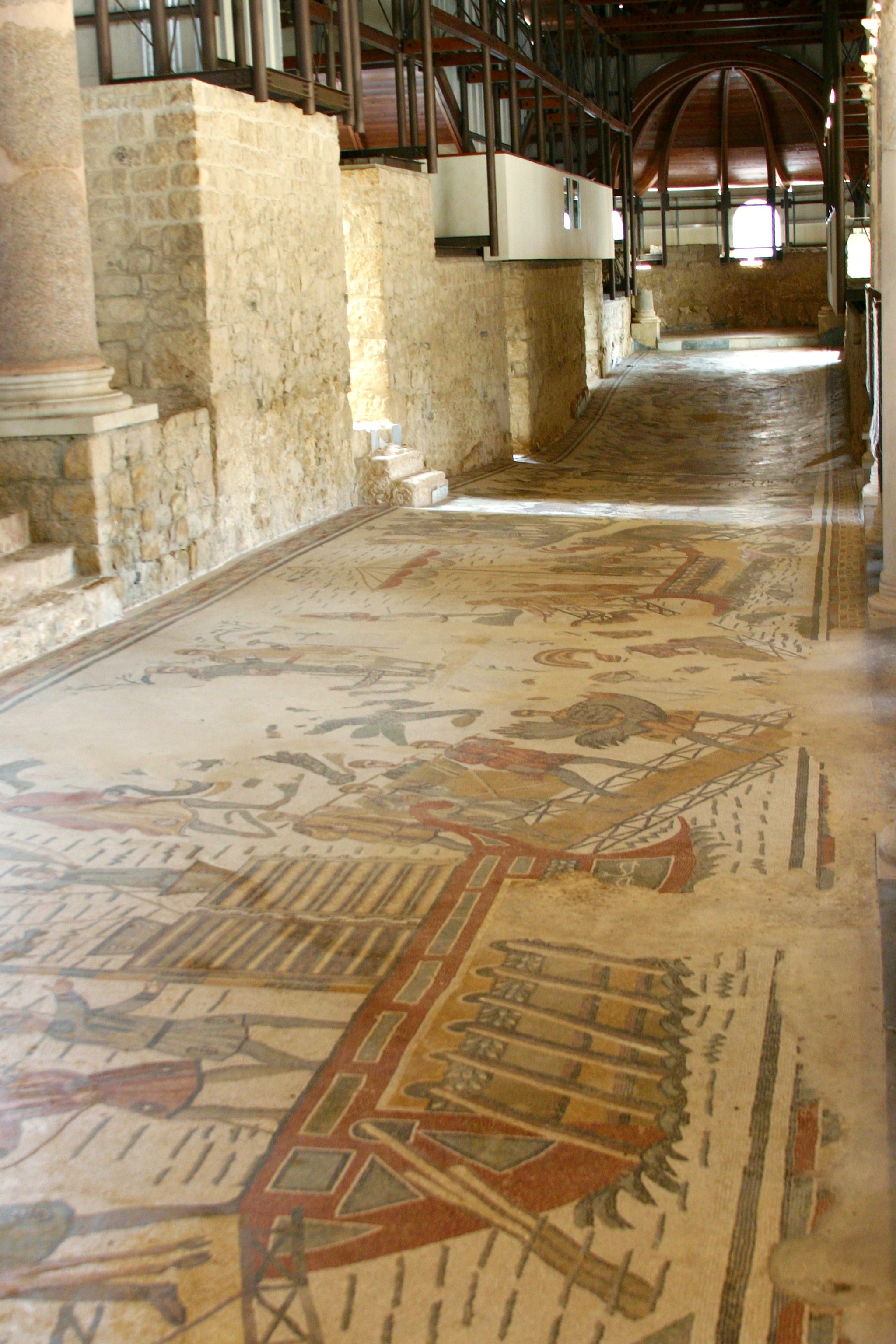 The Great Basilica, the private apartments, at the Villa Romana featured the Corridor of the Great Hunt with scenes of capturing animals in northern Africa and their transport back to Rome.

The Great Hunt Mosaic in the Basilica and North Rooms. View item.

This is an example placeholder story for the Great Hunt mosaic and is for demonstration purposes.

The overall plan of the villa was dictated by several factors: older constructions on the site, the slight slope on which it was built, and the path of the sun and prevailing winds. The higher ground to the east is occupied by the Great Basilica, the private apartments, and the Corridor of the Great Hunt; the middle ground by the Peristyle, guest rooms, the entrance area, the Elliptical Peristyle, and the triclinium; while the lower ground to the west is dedicated to the thermal baths.

Walk through the Basilica in the Villa Romana

Explore the virtual tour of the elaborately-decorated Basilica and North rooms and learn more about the scenes on the mosaics.

The whole complex is somewhat unusual, as it is organised along three major axes; the primary axis is the (slightly bent) line that passes from the atrium, tablinum, peristyle and the great basilica (coinciding with the path visitors would follow). The thermal baths and the elliptical peristyle with the triclinium are centred on separate axes.

Little is known about the earlier villa, but it appears to have been a large country residence probably built around the beginning of the second century.

Recent excavations have found a second bath complex close to the storerooms at the entrance dating to the late antique phase and showing rare wall mosaics belonging to a basin or a fountain.

The Villa Romana in the Late Roman Empire

The visible remains of the villa were constructed in the first quarter of the 4th century AD on the remains of an older villa rustica, which are the pars dominica, or master’s residence, of a large latifundium or agricultural estate.

The owner's identity has long been discussed and many different hypotheses have been formulated. Some features such as the Tetrarchic military insignia and the probable Tetrarchic date of the mosaics have led scholars to suggest an imperial owner such as Maximian. However, scholars now (2011) believe that the villa was the centre of the great estate of a high-level senatorial aristocrat.

Three successive construction phases have been identified; the first phase involved the quadrangular peristyle and the facing rooms. The private bath complex was then added on a north-west axis. In a third phase the villa took on a public character: the baths were given a new entrance and a large latrine. A grand monumental entrance was built, off-axis to the peristyle but aligned with the new baths' entrance in a formal arrangement with the elliptical (or ovoid) arcade and the grand tri-apsidal hall. This hall was used for entertainment and relaxation for special guests and replaced the two state halls of the peristyle (the “hall of the small hunt” and the “diaeta of Orpheus”). The basilica was expanded and decorated with beautiful and exotic marbles.

The complex remained inhabited for at least 150 years. A village grew around it, named Platia (derived from the word palatium (palace).

In the 5th and 6th centuries, the villa was fortified for defensive purposes by thickening the perimeter walls and closing of the arcades of the aqueduct to the baths. The villa was damaged and perhaps destroyed during the short domination of the Vandals between 469–78. The outbuildings remained in use, at least in part, during the Byzantine and Arab periods. The settlement was destroyed in 1160-1 during the reign of William I. The site was abandoned in the 12th century AD after a landslide covered the villa. Survivors moved to the current location of Piazza Armerina.

What is depicted on the mosaic floor of the corridor between the Basilica and North Rooms?

Based on the information in this story, what scene is depicted in the mosaics that you've been learning about?

The entrance to the baths of the Villa Romana del Casale is located at the NW corner of the peristyle, between this and the palestra. This small, slightly irregular room served as the passage from the main part of the villa to the thermal baths. View item

The Romans emulated many of the Greek bathing practices. Romans surpassed the Greeks in the size and complexity of their baths. This came about by many factors: the larger size and population of Roman cities, the availability of running water following the building of aqueducts, and the invention of cement, which made building large edifices easier, safer, and cheaper. As in Greece, the Roman bath became a focal center for social and recreational activity. As the Roman Empire expanded, the idea of the public bath spread to all parts of the Mediterranean and into regions of Europe and North Africa. With the construction of the aqueducts, the Romans had enough water not only for domestic, agricultural, and industrial uses, but also for their leisurely pursuits. The aqueducts provided water that was later heated for use in the baths. Today, the extent of the Roman bath is revealed at ruins and in archaeological excavations in Europe, Africa, and the Middle East.